While In San Diego... 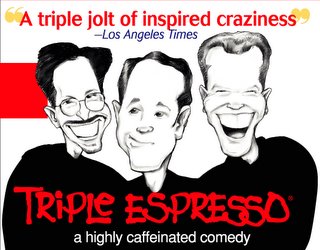 ...we saw a musical called Triple Espresso. It was great - if it comes to your town be sure to check it out!
Posted by LauraK at 2:45 AM 1 comment:

Did You Miss Me? 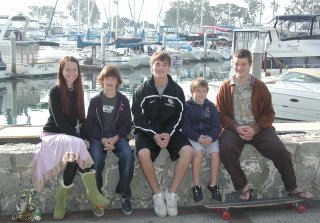 We traveled to San Diego for Thanksgiving! It was a great vacation - beautiful weather, delicious food, hardly any fighting.... It's always a challenge to travel with such a large family. We drove two cars and stayed in three rooms at the Hyatt in Seaport Village. We had Thanksgiving brunch at the hotel and finished the day at the movies (a Kluvo tradition.) We have been there twice before and took this photo as a reenactment of one taken seven years earlier when Will was just a toddler. We had lots of fun on Friday - shopping and visiting Belmont Park (an amusement park on the beach.) Ken took Will to tour an aircraft carrier - the USS Midway. We drove home yesterday (It's about a 7-hour trip) arriving safe and sound.
Posted by LauraK at 7:01 AM 4 comments:

The daughter of a friend and former pastor of mine has been in a serious car accident. Her name is Shea Hickok. Her boyfriend was killed and her brother was injured in the accident. She is in very serious condition. You can read regular updates here. If you are a member of a church, or a Sunday School or any kind of prayer chain, please add Shea to your prayer list. She is a beautiful young woman. In every way.

On Saturday, November 19th a car full of teenage kids crashed just outside Macon, Georgia. Among the passengers in the car were Lauren Shea Hickok and her brother Luke Hickok, the two eldest children of Steve and Susan Hickok.

The vehicle had cartwheeled four times before coming to a stop. When Luke Hickok unfastened his seatbelt and got the door nearest to him open, he went to find his sister and found her under the trailer they were pulling. Luke was able to pull his sister from under the trailer and get her breathing.

Shea's boyfriend died at the scene.

When Lauren arrived at the hospital the doctor in charge said that he had never seen the amount of lung damage in an accident victim and prepared the family for the worst.

At first the situation appeared little more than hopeless as Shea was getting 100% of her oxygen through artificial means. Many of the bones in her face are broken as are her clavicle and two vertebraes abover her ribs. Although her lungs were not punctured, they were not functioning.

Shea was the most critical patient in the hospital, and was placed in a medically induced coma.

As word went out around the country, a host of people began a vigil of thoughts and prayers for the family. A group of 30 people traveled two hours to be with the family from Atlanta. Susan's brother and sister arrived to be with them at the hospital and have been there constantly since.

What has happened since... is a tribute to the grace of the Creator, the care of the doctors and the thoughts, prayers and energy of hundreds of people in behalf of one of God's most amazing creations.

Just one day after preparing the family for the worst, the doctor brought two more doctors so "they could see a miracle." She is still in very critical condition, but the improvements we have seen to date are encouraging.

For those who know and love the Hickok family, we would like to provide this blog as a means of communicating daily updates.

This is the beginning of a very long journey for the family, and your postings will be read to Shea even while she is in the coma, and for as long as she is walking this most difficult path.
Posted by LauraK at 11:25 AM 6 comments: 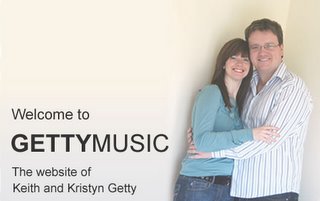 ...but I love music even more! As we approach the holiday season my schedule is filled with rehearsals and performances. It was my privilege to hear Keith and Kristyn Getty in worship on Sunday morning. Here is a link to their website. They are Irish, living in Switzerland and touring the United States. Check out the lyrics to their hymns. They are pure poetry!
Posted by LauraK at 6:27 PM No comments:

Congratulations to Sarah and Charles! 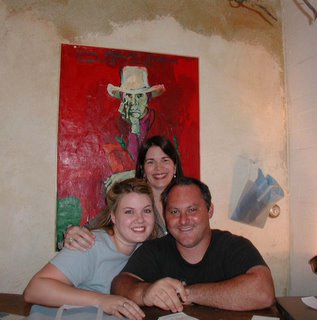 The annual "Best of Phoenix" issue of the Arizona Republic is out today. This is always a favorite. I quickly skip past all of the restaurant and entertainment choices and head straight to the shopping. Once again - Passage is the winner of the Best Place to Find Locally Designed Fashion. Here is a transcript of the article:

For the artistically minded shopper, Passage is your gem. Stocked with clothing and accessories handcrafted throughout Arizona, the desert-inspired urban boutique attracts those searching for something a bit different.

The recently remodeled shop carries an assortment of one-of-a-kind and limited-edition pieces - vintage brooches, deconstructed T-shirts, silver-beadwork bracelets, patchwork bags and hand-finished men's jeans - carefully selected by owners Sarah and Charles Walker. You'll feel thrilled knowing that most of the designs can't be found outside the Valley.
Posted by LauraK at 8:52 AM 2 comments:

A Girl Can Never Have Too Many Handbags!

Click on the link above to check out several galleries of handcrafted handbags. Aren't they great?
Posted by LauraK at 11:59 AM 5 comments:

It's The Sequinned Peacock Pin! 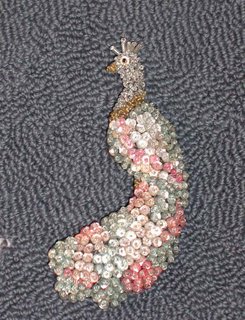 I love it! It has the oh-so-retro-yet-shabby-chic-handcrafted look that I adore. AND it reminds me of my grandmother who made things like this for the Christmas tree. Here is a link to the vintage swap flickr photo file.
Posted by LauraK at 10:36 AM 4 comments:

I had the BEST swap partner - I'm SOOOoooo lucky! I thought I sent her some really great things but the stuff I received was even better. Lynette is a vintage textile dealer. Be sure to check out her stuff at Mama Wiskas. Anyway....

This is what I unpacked....

Notice that in the first photo everything is packaged in pretty tulle bows. I almost tore them open before I realized I should take a photo! 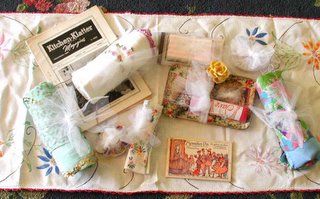 Here is what was inside: An embroidered dresser scarf, a vintage floral-print smock-type apron, a sheer aqua and gold organdy apron, a set of embroidered pillowcases, a pair of darling coasters, shoe buckles, needle books, a needle case, a floral tray, a porcelain yellow rose pin, a crocheted teacup and saucer perfectly fitted with a candle, a 1955-56 pocket calendar/notepad, an embroidered tea towel, a set of darling french postcards, Six "Kitchen Klatter" magazines from 1957, a package of kleenex with my monogram (extra cute since I included a monogrammed handkerchief in my package to her!)a set of six cocktail napkins detailed below and a sequinned peacock pin. Can you guess my favorite item? 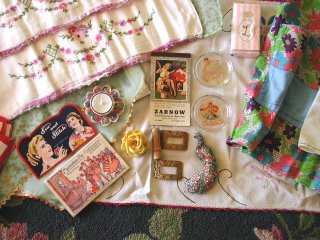 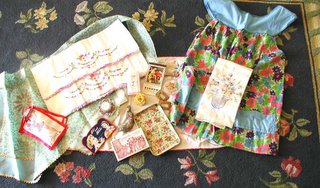 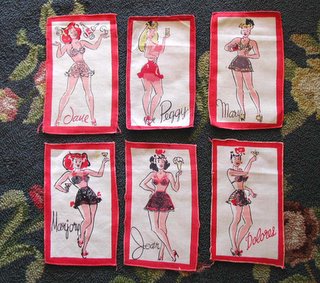 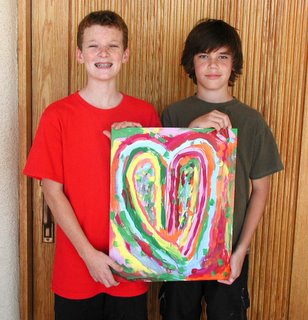 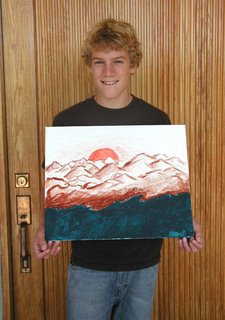 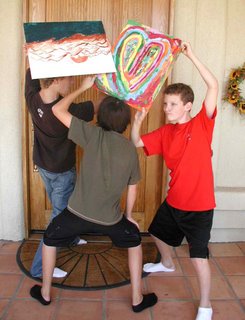 Matt, Ryan and James are back with their latest art projects. James and Ryan collaborated on the heart painting. Matt did the landscape. Aren't they great?
Posted by LauraK at 6:35 AM 2 comments:

A Blast from the Past

Once upon a time in the Dark Ages I was a "Professional Free-Lance Craft Designer" working for several major publishing houses. One of these is called
Leisure Arts. Every once in a while one of these books shows up to mock me. Here is one on eBay which apparently has NO bids! I believe this is from the late 80's - maybe 1990....
Posted by LauraK at 3:00 PM No comments: 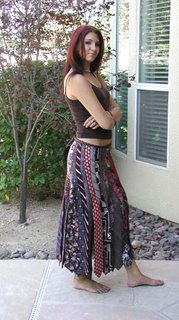 Well, I've gone a little long without posting any necktie projects - so here's a favorite. My model is Sunny Davis. Isn't she gorgeous?!?!? She plays the cello - the CELLO - in a band called The Stiletto Formal. You might recognize Sunny from a previous post.

Anyway.... This was a tough design. There are about 30 ties and it is HEAVY! They're sewn together about halfway down and then loose at the bottom. You should see this in motion....
Posted by LauraK at 8:29 AM 5 comments:

Well, I can't sleep because I caught my charming son Daniel sneaking in at 1:40 a.m. He was in the bathroom when I knocked. "Where have you been?" I asked. "Sleeping," he answered. I glance in at his carefully-made bed - all the pillows perfectly arranged - teddy bear in the center. "Dan, tell the truth." "Sleeping." "Dan." "Okay I was at my friend's house playing poker." "Which car did you take?" "The truck." That would be my husband's pick-up truck. Ken will certainly know that his truck has been driven. We will be having a talk about this incident tomorrow. Any advice?
Posted by LauraK at 3:03 AM 7 comments: