Help! I've fallen into a sea of neckties and I can't get out!

Oh, it started innocently enough with my special orders... Then I took a look at the leftover pieces of those pink and purple ties and thought I'd make a couple of daisies. Then I made a skirt from the fat ends of the ties from Adele's bag. Then I saw all the leftover in-between pieces and made a necktie backpack (photos to follow.) I haven't made these in a while and I was just testing myself to be sure that remembered how. Then I stitched up a handbag from the pink and purple pieces - and now I'm finishing a "special order" skirt for Ryan's little sister. I've never made a pint-sized necktie skirt before. It's just 12 inches long and Sooooo cute. Meanwhile the daisies are selling like crazy so I'm making more of these too.

I had very good intentions of putting away the ties until fall....maybe after one more skirt....
Posted by LauraK at 4:41 PM No comments: 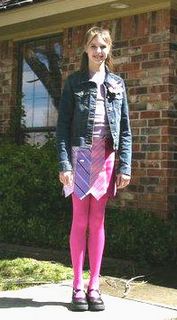 A happy girl in her new necktie skirt! 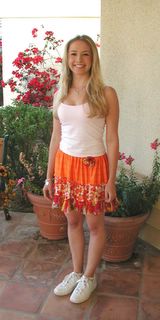 Posted by LauraK at 7:14 AM No comments: 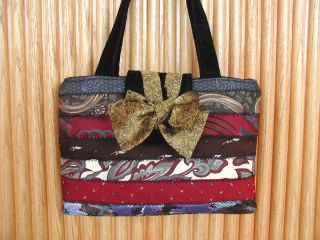 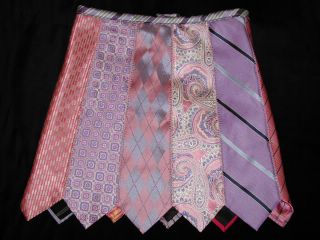 The front of Caroline's skirt 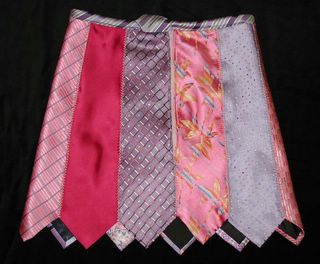 Back of Caroline's Skirt

First, my new friend, Joyce - a widow - aked me to make a bag for her daughter, Adele, from her husband's ties. She had been saving them for "something special." She brought me a selection of ties that included the bow tie that he wore at Adele's wedding. I was able to work it into the design. The ties even smell faintly of dad's cologne...which I left of course. I am very anxious for Joyce and Adele to see this bag. I hope they like it.

Then I had a special request from a mom in Texas. She wanted a necktie skirt for her daughter, Caroline. She had the ties all selected. WOW! I was really excited to see a collection of GORGEOUS pink and purple NEW ties! NEW! I hardly ever work with brand new ties and it was a real treat. Didn't this skirt turn out great? I'm anxious to hear how they like it.

If anyone out there is interested in a custom design like one of these, please caontact me at kluless7@cox.net - thanks!
Posted by LauraK at 3:11 PM No comments: 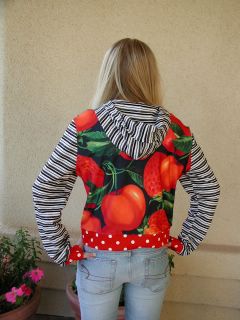 This is the back of one of my new hoodie designs. 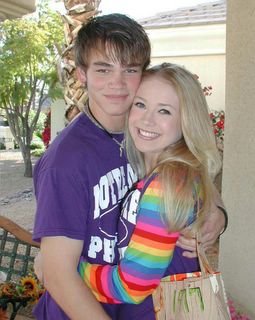 Dan and Ryan...Awwwwww.... Ryan is wearing a hoodie that I made from one of Dan's Phys Ed T-shirts. 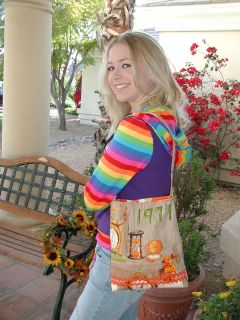 Another calendar bag! Doesn't it look great on Ryan?

Posted by LauraK at 5:45 AM No comments:

Here are several of my new vintage calendar towel bags. They are lined in contrasting fabrics and have inside pockets. The straps are trimmed with rick rack - of course - and the fronts are trimmed with rick rack and appliques. These calendar towels are all from the late 70's and early 80's. Aren't they fun?
Posted by LauraK at 7:55 PM 3 comments: 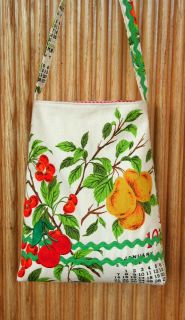 Posted by LauraK at 7:54 PM No comments: 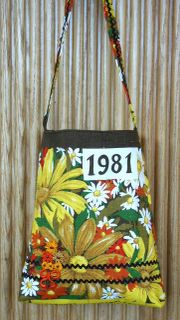 Posted by LauraK at 7:51 PM No comments: 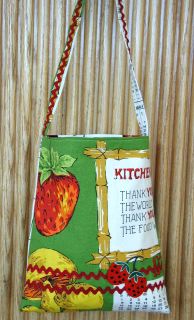 Posted by LauraK at 7:47 PM No comments: 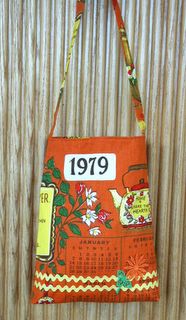 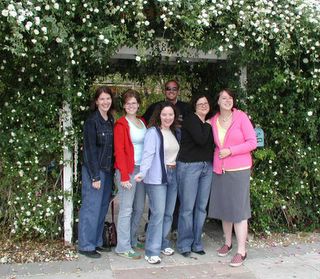 AZ Craftsters meet again! From left to right its me, Denise, Carol, Bonnie and Ellen. The Mailman was delivering mail so we invited him to join our photo.... sorry I didn't get his name...

Posted by LauraK at 5:59 PM No comments: 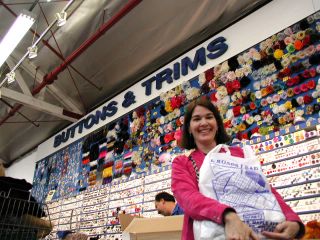 Here I am with my first fabric purchase at Michael Levine in the textile district in downtown Los Angeles. I am VERY happy. 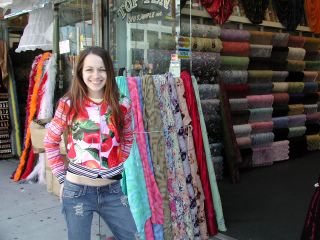 We are home from Los Angeles. We had a great time - lots of shopping! Here is a photo of Kaitlin in front of a store in the textile district. She is wearing a hoodie from my spring line. More later!
Posted by LauraK at 5:41 AM No comments:

Off To Los Angeles!

Kaitlin and I are going to LA tomorrow! I'll have a full report when I return.
Posted by LauraK at 6:13 PM No comments:

I was reviewing the last post and realized that the references to my various children could be confusing. Ken is my husband - I'm Laura. Matt is the oldest - age 23 and a senior in college. Kaitlin is next - age 19 and a sophomore in college. Then comes Dan - age 16, James - age 12, and William - age 8. The oldest two are "out of the house." The three youngest boys live at home. Have a great day!
Posted by LauraK at 11:07 AM No comments:

I had big plans to stay home all day on Wednesday sewing and watching the Project Runway Marathon.... HA! First I had to drive William (my second grader) to the bus stop. Dan (the 11th grader) usually comes too but he wan't ready so I had to turn around and come back home to fetch him after Will's bus picked him up. I picked up Dan and took him to his friend's house (Kelly who usually drives him to school.) But Kelly had overslept and was running late so I had to drive Dan all the way to school. On the way there he said he hadn't had breakfast and asked if we could stop somewhere. We had time so I agreed. (He should have had breakfast while I was waiting at Will's bus stop. Are you following this?) By the time we got to Dan's school it was late and I got caught in the dreaded "drop-off snafu." Anyone who drives their kids to school knows what I mean. I returned home to find James about ready to leave. This is the easy one - he is in 7th grade and WALKS to his bus stop. BUT he had a Science Fair Project on one of those big boards and asked if I would drive him. I drove him to school too and When I finally arrived home it was 8:45. I took a shower and sat down to sew.

After about 15 minutes - the POWER went out! Arghhhh... I decided to make the best of it and moved into the kitchen where I have a skylight and could see very well. I windexed off the counter and started to cut out a new project. The phone rang and it was Dan asking me to pick him up - he "Didn't feel well..." I explained that there was no power and I didn't think I could get the garage door open but that I would try.

I went out to the garage, disengaged the electric door opener and tried to lift the door manually. I got it up, but it wouldn't stay. I tried several things. I stood on a chair, I got a ladder, but it just wouldn't stay up. I tried to call Dan back but he didn't answer his cell phone. I returned to the task. Now here is a word of advice: If you have to lift a large and heavy garage door by yourself be certain you are lifting from the absolute CENTER of the door.

I was off to one side and I heard a horrid screeching sound. The door was now stuck. I hopped down from the ladder and saw that the door was crooked, bent and hopelessly stuck. Some of the wheels were off the track. There was no way I was getting out of there. I was officially imprisoned.

I called my husband Ken and asked if he thought he could fix this. He is an engineer and really good at these things usually but he explained how dangerous garage doors were and how the tension in the spring held tons of force etc. etc. and this was a job for a professional. So I called the first garage door repair place in the yellow pages and they said they could be there between 11:00 and 2:00. I was certain that meant 2:00. Also, there was a miniumum charge of $49.00 for the service call... $199.00 to rewind a cable... $149.00 to reset the spring. If the bent panel had to be replaced that would be more. $$$$ etc. etc. So I feared the worst.

Meanwhile the power came back on. Dan called and said he was returning to class. He now felt "better..." Arghhhh.... I'm pretty sure he just went to the clinic to poop.

Anyway, I sat down to sew again and Ken called to say that he had a call from the bank to let us know that our checking account was overdrawn and we had until 4:00 their time to make a deposit. Ordinarily this wouldn't be a big deal. I can wire funds from my account here in Scottsdale to this account in Florida. But I was still waiting for the garage door guy.

BUT THERE IS GOOD NEWS - The Project Runway Marathon started at 12:00 and I had six new blank video cassettes! I set the first one to record the first two episodes. The garage door guy arrived and fixed everything for $314.00.

But of course there was more to come.

My oldest son Matthew has been planning a trip to Florida to visit my mom for Spring Break. He has had airline tickets (he and his sweetheart Kelly are traveling together) since January. Well he called to ask if he could leave Kelly's dog here with me.

Please understand that we have never in 25 years of marriage had a dog. My husband absolutely forbids it. He won't even change the dirty diaper of his own child. He does not want to clean up after a dog. Matthew knows this. He had two months to figure out what to do with the dog. But he irresponsibly waited until the last minute. This way he can blame me. I can feel guilty. I'm going to be in Los Angeles with Kaitlin over Spring Break and I won't even be here to take care of the dog. Whatever.

At about 4:00 I called the bank to make sure the money had arrived...but I still had a negative balance. The bank was closed. I left a message. At least I had four episodes of Project Runway on tape. Not everything was bad.
Posted by LauraK at 3:23 AM 2 comments:

That's Project Runway Withdrawal! Anyone else? Will there be a season two? Will season one be available on DVD? WHEN? I mean I probably saw each episode five times.... And of course I now know how it ends - but I still miss it! I always felt like the part I was most interested in - the actual MAKING of the clothes - was the part that the producers showed the least. Like here's the assignment - and then the shopping - and then the drama in the apartments - and then the twist - and then voila - we're done - time for the runway! I want to see more of the actual designing - the pattern drafting - the cutting, the seaming, the fitting, the adjustments. Yes they did show some of it - but not enough! I miss Project Runway!
Posted by LauraK at 12:22 PM 3 comments:

Working on my Spring Line

I'm busy busy busy sewing away on new designs! Ruffled Minis, Rainbow Hoodies, and Messenger Bags are piling up in the sewing room! I've donated a couple of things to charity auctions - that's always fun. For Daniel's school fundraiser I took one of the Phys Ed t-shirts and converted it into a hoodie. Jessica wore it to class to promote it and got a lot of interest. The auction is on March 12th. I donated a necktie skirt and a bag to a church fundraiser. That auction is the 5th. I'll keep you posted.

Meanwhile my Randomonium Messenger bag is still sitting on eBay with NO bids :(. There's still time though... we'll see...
Posted by LauraK at 7:53 AM No comments: